"A city is not gauged by its length and width, but by the broadness of its vision and the height of its dreams.."
- Herb Caen

As a framework, Universal Energy places a primary emphasis on modularity and standardization because these concepts enable flexible – and innovative –deployments of new technologies. That’s why Universal Energy looks to cities for large-scale renewable integration. While cities have the highest population density, and thus demand the lion’s share of both energy and resources, they also allow us to integrate renewables on a large scale as a byproduct of municipal infrastructure budgets. Deploying renewables within cities in a standardized, modular capacity affords Universal Energy the flexibility to serve important secondary purposes and solve future problems.

To see how, consider the following six images of civil infrastructure. Imagine, as we did last chapter, that they were completely integrated with renewables. Every window and roof of every building. Every road and off-ramp. Every bridge. Every highway median. Everything. 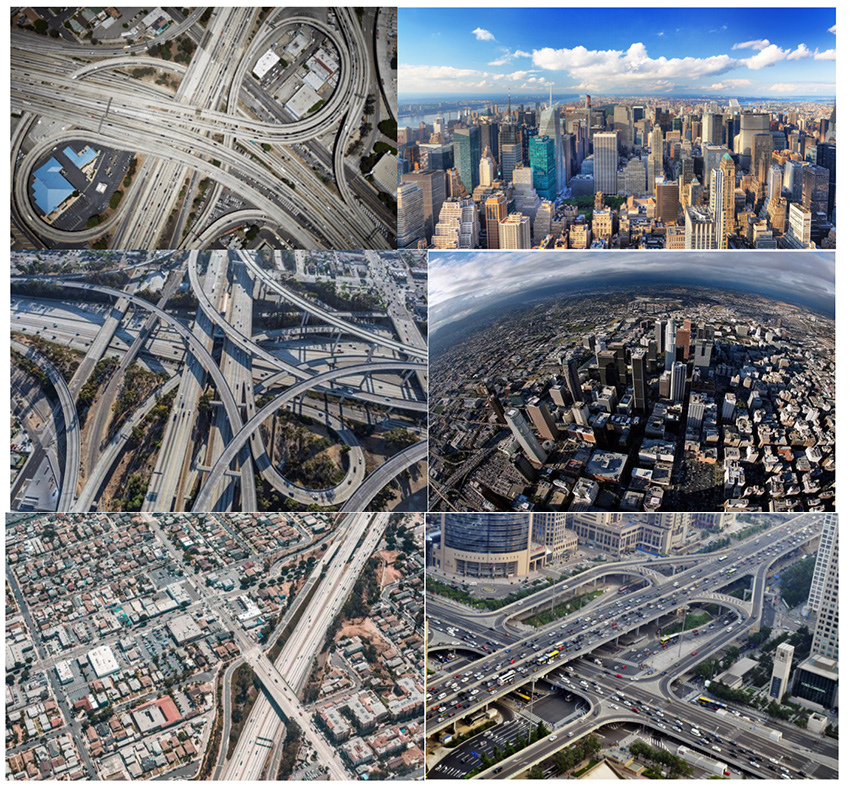 This scale of renewable integration within any municipality will generate tremendous energy. But that’s only a feature of the strategy; it’s not the end goal. The goal is to not only remove the net energy demand cities place on our national electric grids, but also to further turn that into net energy production, functionally transforming cities into power plants.

To see how this possible, let’s run some numbers. Miami-Dade County in South Florida spans an area of 2,431 square miles, 1,898 of which is land.[1] It assessed a net energy consumption of 132.13 billion kilowatt-hours in 2018.[2] We saw earlier how one square mile of solar panel surface can reliably generate 836.4 million kilowatt-hours per year. That means Miami-Dade County would only have to integrate renewables with 159 square miles of its infrastructure – less than 8% – to become resource independent. At 10%, the county generates more power than it consumes. At 16%, it’s a power plant. One might be forgiven for wondering what possibilities could arise should that integration reach 30%, 60%, 90% - all the more so as renewable technologies advance over time.

We see how this approach can remove the energy cities consume on external power networks and transforms cities from net energy consumers to net energy producers as a standard function of municipal operation. But from there, several key side benefits can help cities take full advantage of their next-generation infrastructure. Of them, standouts include smart grids, intermittency avoidance and centralized resource production.

At sufficient scale, municipal deployment of renewables enables cities to “detach” from external energy-generating infrastructure by zeroing out their demand on regional electric grids. Once this deployment of renewables expands to the point where cities can reliably generate and store more energy than they consume, they can function as power-generating entities, like nodes on a network.

But it’s important to note that this power generation doesn’t necessarily have to plug into existing grids. Instead, they can create their own separate electric grids that operate in parallel. Multiple grids could serve the same area, which makes them highly reliable and capable of operating intelligently to respond deftly to spikes in energy demand. To explain what I mean by that, it’s useful to see how our electric grid works today and why it’s not up to par to meet the challenges it will likely face in the future.

As of 2017, our national electric grid is comprised of 7,600+ decentralized power plants[3] that are owned by 3,200+ competing utility companies[4] that transmit electricity through 450,000+ miles of high voltage power lines, relay stations and transformers.[5] In other words, it’s a total mess.

Whenever a power line goes down (storms, transformer overload, accidents), any location in the service area will go dark and will remain so until new power lines are constructed or a workaround is built. (See: Puerto Rico after Hurricane Maria).

Due to the difficulty of preventing these disruptions, electrical outages leave an average of 500,000 Americans without power for two hours or more on any given day.[6] This is a costly problem. The National University System Institute for Policy Research concluded one 2011 blackout in San Diego cost the city between $97-$118 million.[7] That's for one non-disaster-related blackout in one metropolitan area of one state. Nationwide, the Lawrence Berkeley National Laboratory suggests that power outages cost the U.S. economy some $80 billion each year.[8] Worse, in times of extreme heat or cold, blackouts can present a risk to public safety. In the past two decades, power outages have been blamed for hundreds of deaths (141 in California during a single July heatwave in 2006, for example).[9]

Addressing these problems with current methods will be both challenging and expensive, akin to making a computer built in the 1980s compete with today’s latest models. By some estimates, it will cost upwards of $1 trillion to improve U.S. electric grids to simply meet demand by 2025.[10] Municipal deployment of renewables completely changes that. A stretch of renewable-integrated highway median or solar road canopy does not need power lines – they are the power line. They are an electric grid. A business district with buildings covered in solar windows serves the same purpose.

Within a city, integrated renewables provide their own electric networks that operate on top of present infrastructure. Connected redundantly to both each other and existing electric grids, they can route and reroute energy as necessary. Paired alongside the National Aqueduct or other storage mediums, they can function as independent nodes to deliver power where it is needed most.

This provides some important side benefits. For starters, it increases the security of our electric grid multifold. To see how, take a look at the image on the following page that represents today’s electric grid at the regional scale. In this setup, if a central power line or substation were to be disabled, the entire section of the grid they serve would go dark. Our electric grid is then vulnerable to environmental disasters, terrorist attacks or freak accidents.

By integrating renewable energy within infrastructure on a large scale, our grid becomes substantially more reliable. Wide swaths of it would have to be destroyed in order for it to stop functioning completely – making it far more resilient than our current approach to electricity transmission.

Moreover, a modular, redundant electric grid provided by integrated renewables allows for improved power management by municipal utilities, affording secondary methods that can be engaged as needed based on spikes in demand or blackouts. Municipal authorities would also have an ample supply of usage data that can help create predictive models for intelligent system design. Paired with today’s sophisticated computing and accompanying software, this allows energy management to become more automated and efficient. It allows for the system as a whole to be upgraded more effectively, as the specific information the system provides can help determine the areas to best concentrate on for improvement – allowing energy networks to organically, and intelligently, evolve. 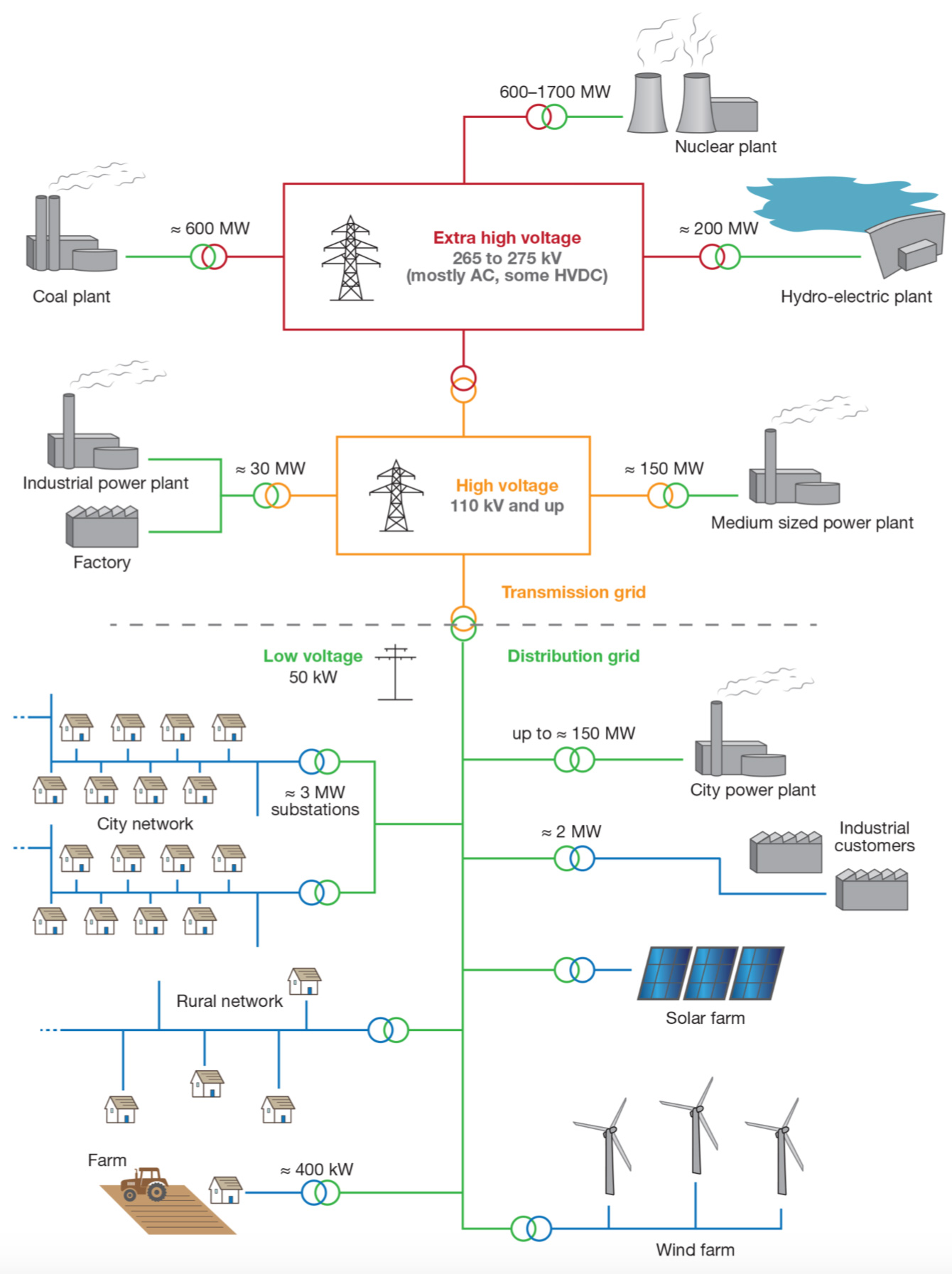 As touched on earlier, a primary obstacle to renewable power today is the question of intermittency – referring to an energy source that’s not continuously and instantly available for conversion into electricity. Solar and wind power might be able to generate lots of energy, but if demand spikes at a time when they’re not functioning (at night or on non-windy days), their utility wanes significantly.

A particular focus of Universal Energy is integrating these smart, responsive electric grids within the National Aqueduct as a parallel energy source that can engage on demand. It would also be backed by a baseload power network of thorium reactors (which we’ll go over next chapter), which by themselves present tremendous energy for nominal use and external resource production. The combined result is a saturation effect, as each power source stacks on the other – and an integrated backup – to each generate energy from each other in parallel. Intermittency is thus removed as a primary obstacle, as the entire system is “instant-on” from at least two of three energy sources.

Universal Energy seeks to make resource scarcity irrelevant by making energy scarcity irrelevant, as the transformation of cities into energy-generating centers allows for the synthetic production of nigh-unlimited resources in locations close to consumption. As we’ll review later, this enables metropolitan regions to do things like extract fresh water and hydrogen fuel from seawater, grow food indoors and synthetically manufacture building materials – all to scale.

This re-imagining of cities has such potential to improve how we generate energy and acquire resources that it’s easy to focus on the technical benefits of such capabilities – power, infrastructure, resources, utility management. Yet the social benefits hold equal potential. When every aspect of a city is overhauled in such circumstances, each new upgrade acts as a basis for further improvement that can be reinvested to increase a collective quality of life. It helps reinforce optimism of what’s actually possible when we stop and realize that investing in our future best interests is actually in our future best interests, and removes psychological barriers to initiatives seeking to continue this trend over the long term. We believe, fundamentally, in what we can build when we actually build it.

The benefits of this investment also does not limit itself to the commercial, tourism, and cultural hubs that define our national image. There is no shortage of places outside of America’s elite coasts that could use a facelift. Centering municipalities within a national energy framework and investing in next-generation infrastructure is perhaps the fastest way to see that result delivered. Reaching that end for all American cities is a central goal of Universal Energy, one we’ll focus on specifically within Chapter Twelve.

Once cities become central to generating electricity, next-generation manufacturing, and resource production, they can provide for themselves and their surrounding regions, markedly increasing the quality of life for millions. Side benefits of this approach naturally include expanded job opportunities, stimulated economy and reduced crime. At the same time, national electricity demand is proportionally reduced as a result of integrated renewables within municipal infrastructure. From there it sets up the next stage of the framework, which is to leverage next-generation nuclear to overhaul our resource production schema, and scale our energy generation capability to uncharted heights.