"The word 'energy' incidentally equates with the Greek word for 'challenge.' I think there is much to learn in thinking of our federal energy problem in that light. Further, it is important for us to think of energy in terms of a gift of life."
- Thomas Carr

The Scarcity Zero framework starts with renewable energy. Not just because it’s versatile and easily accessible, nor because it boasts a historically unprecedented capability to generate energy from a truly unlimited source. Rather, Scarcity Zero leverages renewables – specifically solar, wind and artificial hydroelectric – because of their ability to both integrate within large-scale infrastructure and power resource production as a municipal function.

This works across two areas of focus.

The first is the integration of solar and wind power directly within urban infrastructure to remove the obstacles and cost limitations they face today. This is a critically important distinction to our current approach towards solar and wind power, which only comprise 10% of energy generation nationwide.[1] While the usual suspects[2] in fossil energy lobbies certainly play a role in this,[3] the justified condemnation of their undue influence often glosses over the significant logistical and economic challenges to implementing renewables over a large scale. As we’ll see shortly, an integrational approach inherently avoids those challenges.

The second area of focus is The National Aqueduct, a vital function of Scarcity Zero intended to transport desalinated water anywhere in the country by piggybacking on the pre-cleared and largely publicly owned land of our interstate highway system and high-tension power line networks. Further, the National Aqueduct acts as both a power plant and a battery by deploying solar, wind, hydroelectric and thermoelectric functions as a single system. The National Aqueduct is detailed within Chapters Seven and Eight, but it’s useful to keep it in mind as it’s referenced several times before then.

As Scarcity Zero seeks, by design, to bypass the challenges inherent to renewable energy, we’ll take a minute to review these challenges and why they stand in the way of a clean energy future.

Location and transmission. Electricity, like sound, weakens over distance due to resistance in transmission mediums – in our case, power lines.[4] As a general rule, the farther electricity must travel, the harder it becomes to transmit. For example: there is enough open space in the American southwest for solar panels to power the entire planet.[5] Yet transmitting electricity from the southwest to locations thousands of miles away is both difficult and expensive. It’s possible to generate the energy, but we can’t efficiently get it from point A to point B once we start spanning large distances. Even if more efficient power lines emerged, they would still cost millions of dollars to build per-mile.[6] This means renewables are best deployed in locations close to where their generated energy is consumed.

Deployment expense and physical space. Solar and wind power require relatively large areas of land to be useful. Given that they are best deployed in locations close to energy consumption, this presents a secondary problem: land costs generally increase with population density. If land needs to be purchased for installation, the cost effectiveness of renewables proportionally reduces the closer they get to population centers.

While eco-conscious households and businesses can install renewables by choice, that option becomes harder for governments and power companies when they need to buy land at top dollar. So even as manufacturing costs of renewables continue to fall,[7] expenses of their start-to-finish implementation can remain quite high, both fiscally and politically.

Lack of standardization and prefabrication. As with many fledgling industries, our current approaches to solar and wind power remain unstandardized. Today, solar panels have extensive sizing options and are designed to be installed on varied locations: roofs, soil, rock, motorized platforms, etc. Wind turbines, likewise, come in all shapes and sizes for both residential and commercial applications. While flexibility in deployment is generally a good thing, there is not yet a modular and standardized method to implement renewables on a nationwide scale. This complicates the manufacturing of prefabricated, turnkey systems, increasing end unit cost and limiting overall usability.

Material throughput. Renewables require large volumes of materials to manufacture (10,000-17,000 metric tons per terawatt-hour),[8] materials that further need to be extracted, transported and processed in a carbon-emitting supply chain. This manufacturing process also carries its own drawbacks in terms of toxic waste.[9] Absent a massive carbon-neutral baseload power source such as thorium (outlined in Chapter Four), the large-scale manufacture and recycling of renewable energy and the costs therein would present tremendous carbon emissions and ecological toxicity – even if they themselves generate carbon-neutral energy.

These obstacles have slowed down the adoption of renewable power nationwide, and while advances in research and development have mitigated their impact to various degrees, they still remain substantial. Scarcity Zero seeks to solve this problem by targeting large-scale infrastructure for renewable deployment – especially public infrastructure.

Public infrastructure is the ideal location to install renewables, as it solves four of the five largest obstacles to their implementation: land, location, standardization and scale, with thorium solving the fifth (carbon-neutral manufacturing). 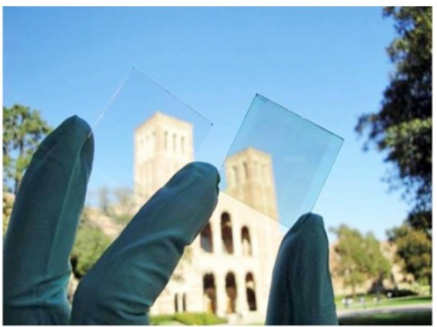 Close to population centers. In most cases, city-owned property tends to be close to cities. Public infrastructure, then, zeroes out the distance between generation and consumption. No expensive power lines need to be constructed, there is no need to transport electricity over long distances. And as advances in material science now allow us to build solar panels that are completely transparent (image to right), we don’t need to sacrifice aesthetics to take this approach.

Think of the streets in your city. The sides, windows and rooftops of every public or government building, every highway overpass and bridge, and every stadium built in part or full with public money; even privately-owned buildings. Imagine all of this infrastructure integrated with solar panels from the moment they were constructed – and all without spending so much as a nickel to buy extra land for their deployment. This image shows only one section of one area of one city. 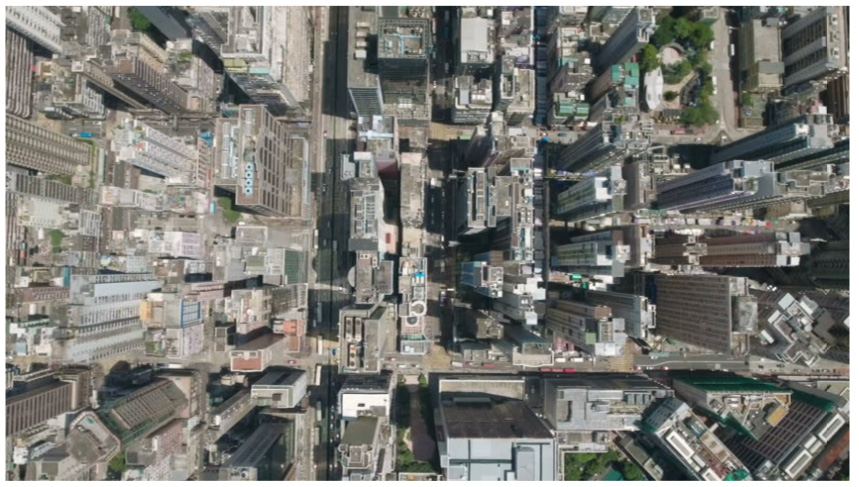 Now imagine every city in America taking this approach. Applying this mindset across every municipality in the country gives us billions of square feet of surface space to deploy renewables that’s both close to consumption and doesn’t require us to buy expensive land.

Standardized manufacturing. Because renewables are so well-suited for large-scale infrastructure, this affords opportunities to build systems that can be mass-produced to a modular standard. Once you know exactly how something’s going to be implemented, it removes variables that add to unit cost and complexity – the end goal of any effective deployment strategy. That’s likely why several solar companies choose rooftops as locations for large-scale residential solar deployment: every home has a roof. The following images show Tesla corporation’s solar shingles, although several companies (RGS Energy, CertainTeed and SunTegra) have released similar products to market.[10]

As these surfaces both retain the aesthetics of traditional roofing tiles while boasting the functionality of solar panels, these companies identified a modular standard to deploy solar panels and manufactured their products to that standard. Yet they still require the personal investment of individual homeowners in order to adopt them on a large scale. By integrating renewables within municipal infrastructure, large-scale adoption can be accomplished with the stroke of a mayor’s pen. This incentivizes manufacturers to invest in renewable technologies that can be built to a standard for wide and consistent deployment nationwide.

Aside from the National Aqueduct, Scarcity Zero looks to three general types of large-scale infrastructure to deploy renewables. They include standing structures, road medians, and road canopies, which we’ll review in depth after taking a quick aside to make mention of some necessary assumptions.