Hydrogen is the most abundant element in the universe.[16] It’s light, clean, and highly combustible, with an energy-per-mass ratio greater than any known fossil energy source.[17] This makes it a flexible and useful alternative to petroleum if we go about sourcing and storing it in the right way.

Hydrogen production is currently a $100+ billion industry,[18] yet most current methods of hydrogen production involve extracting the element from oil or coal through high-temperature steam reformation[19] – a process that is both environmentally destructive and will likely prove untenable once fossil fuels eventually become more scarce.[20] In a world with effectively unlimited cheap energy, electrolysis becomes a significantly more attractive method. 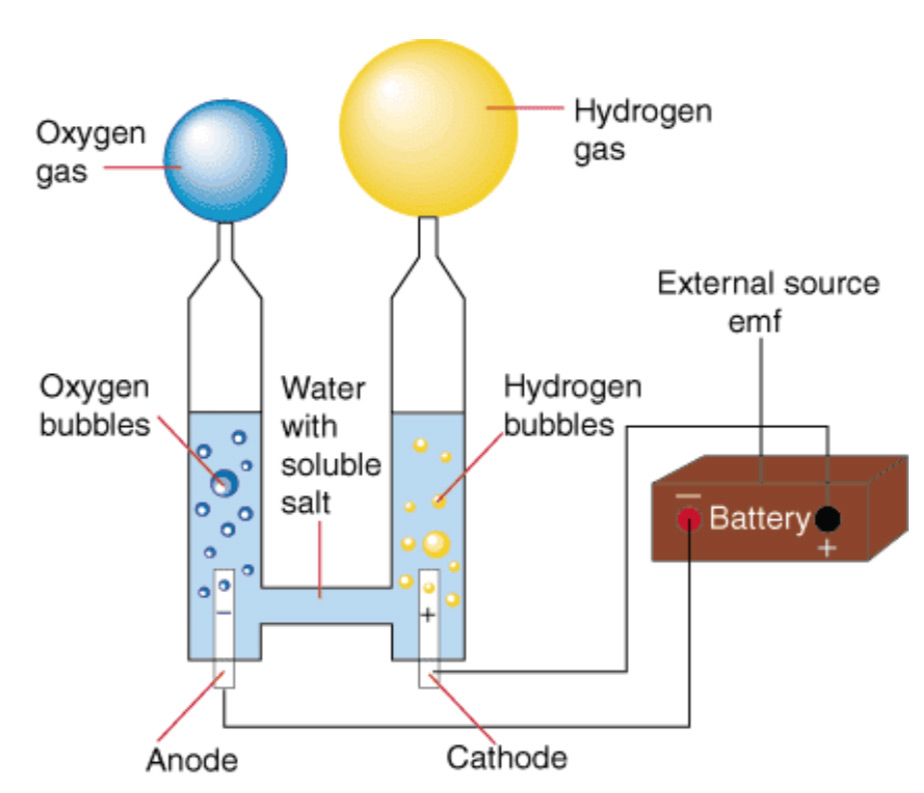 Electrolysis is a process that introduces an electrolyte and an electric current strong enough to break molecular bonds of water, chemically separating it into oxygen and hydrogen gas. Like Multi-Stage Flash Distillation, it’s not a new concept. Electrolysis has been in use since the 1700s to extract various substances, hydrogen among them.[21] Nor is it particularly complex; you could set up a simple facility in your garage, if you wanted to (just don’t smoke).

But to produce enough hydrogen for use as a viable fuel on a nationwide or global scale, an industrial setting would be necessary. Commercial hydrogen extraction through electrolysis has traditionally proven expensive,[22] but Universal Energy mitigates this cost factor as a byproduct of generating heat energy from thorium, making the production of hydrogen through electrolysis perfectly viable. Once extracted from water, hydrogen can be harnessed to power an array of systems and processes, to be discussed throughout the rest of this writing.

But even so, challenges to using hydrogen remain as production is only one half of the equation. The other is how to contain, transport and stabilize it – considerations of no small significance. Because hydrogen is highly reactive, it is easily contaminated as it naturally bonds to other substances.[23] And due to its volatility, it has usually required storage in containment tanks at high pressures. While metal tanks work in a laboratory or industrial setting, the weight of these tanks and the safety risks presented by the explosive nature of compressed hydrogen have made this approach questionable for civilian use. Thankfully, recent advancements have given us new alternatives, such as:

Graphene storage: Storing and transporting hydrogen in compressed form requires immense pressure, on the order of 482–690 bar (7,000-10,000 PSI).[24] Currently, this is only possible through metal tanks that have limited utility due to increased bulk and weight. Through Universal Energy, we’ll have better materials.

Although we’ll be reviewing materials further in Chapter Ten, one of the most noteworthy in the context of hydrogen is graphene,[25] which serves several important roles in the Universal Energy framework. Conceptually, graphene is a one-atom-thick sheet of carbon that is structured in a way that is both ultra-strong and ultra-conductive.[26] This allows graphene to both function as an efficient battery[27] and also a structural material – one that is 200 times stronger and six times lighter than steel.[28] As it can be made paper-thin while remaining flexible, graphene is well-suited to make storage tanks for hydrogen in vehicles and other machinery. Just as importantly, these storage mediums can be amorphously shaped, providing greater flexibility in how they integrate with a fuel supply.[29]

Synthetic oil: Universal Energy’s approach to solving resource scarcity is based in large part on replacing oil as a fuel source, due both to its finite supply as a fossilized product and its contributions to climate change. But oil has other important uses: it’s essential for making plastics and synthetic materials, and it's a critical ingredient for chemical engineering.[30] Oil is type of chemical known as a hydrocarbon, and hydrocarbons are useful for both organic chemistry and fuel for combustion. Oil is the abundant hydrocarbon of our time, so it’s what we use. But that doesn’t have to be the case, especially as oil eventually becomes increasingly scarce and thus expensive in the future.[31]

With an abundant supply of hydrogen, we can use it to manufacture synthetic hydrocarbons for lubricants and chemical stabilizers[32] as well as specialized fuels for sophisticated applications like aircraft and rockets.

We can also use synthetic hydrocarbons for long-term hydrogen storage. Once processed into a solution that stays liquid at normal pressure, we can store an effectively unlimited amount of hydrogen in tanks that don’t require compression and would work similarly to how we transport liquid fuels today. And unlike the environmental damage caused by crude oil drilling, refining and transport, synthetic oil can be processed at facilities that remove ecologically hazardous steps from the manufacturing chain. This becomes all the more important when using hydrogen as a medium to create fuel from atmospheric carbon capture. (We’ll go over these details next chapter).

Fuel Cells: A hydrogen fuel cell is a means of generating electricity from a chemical fuel, in this case, hydrogen. In practice, this allows fuel cells to function as emission-free batteries. Fuel cell technology has been around since the 1950s and has steadily grown since then into a billion-dollar market,[33] with several proven designs powering myriad industrial applications.

In a dynamic with reduced energy costs and improved manufacturing processes, fuel cells become less expensive, easier to build and easier to expand into varied sectors of our economy. 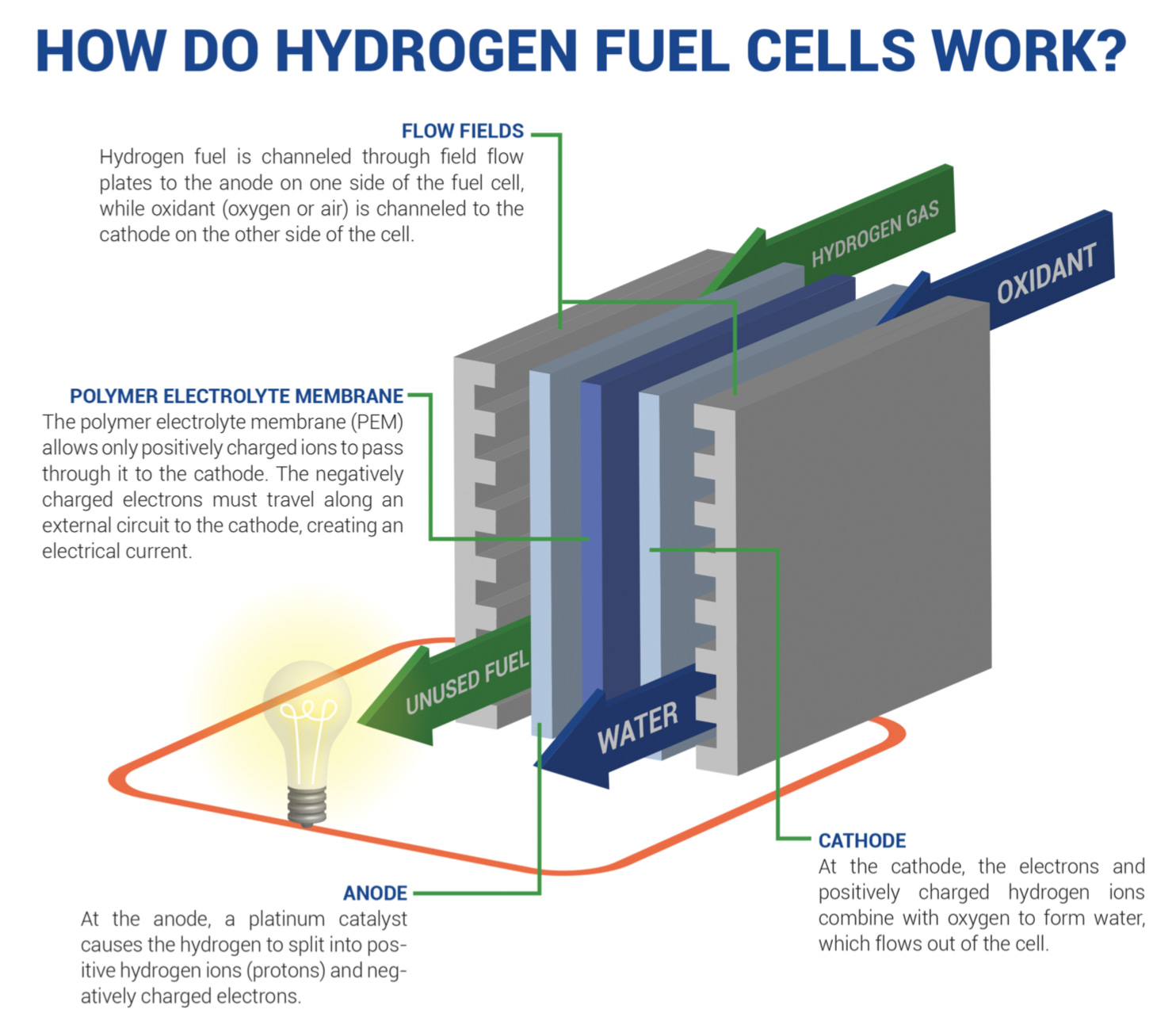 Although hydrogen fuel cells are often looked to as a replacement for oil, they also have potential to power remote areas that are environmentally hostile to power generation. There are several circumstances where it’s not feasible to rely on local power systems and where solar isn't possible (war/disaster zones, remote research facilities, long-voyage ships, space travel, etc.), yet fuel cells can provide energy as long as a supply of hydrogen exists. Future advances in graphene battery technology can also complement this possibility, allowing for robust energy storage even when far away from civilization’s amenities.