"I believe that water will one day be employed as fuel, that hydrogen and oxygen which constitute it, used singly or together, will furnish an inexhaustible source of heat and light.."
- Jules Verne

Of the resources facing impending scarcity, water and fuel are especially important as they respectively make life possible and power vital aspects of our advanced economy. They are also critical to growing, processing and delivering food. Consequently, these resources are the most likely to drag us into conflict when they run low – which is unsurprisingly why we've been fighting over them throughout much of history. Scarcity Zero seeks to solve this problem by generating enough energy to synthesize these resources, further enabling us to produce synthetic building materials on an effectively unlimited scale.

With renewables and thorium in place, the next focus is seawater.

It’s important to note in this context that humanity isn’t facing a water crisis in abstract; we’re facing, specifically, a freshwater crisis. 71% of the planet’s surface is covered by water, yet less than 2% of that water is fresh – and 80% of that freshwater is locked in polar ice.[1] For consumption purposes, that last 20% of freshwater - 0.4% of all water on our planet – is the only percentage that has historically mattered. Thanks to modern seawater desalination technologies, that is no longer true today.

The desalination of seawater is a well-proven concept.[2] The same is true of extracting hydrogen fuel from water via electrolysis, as running an electric current through water chemically separates it into hydrogen and oxygen.[3] Yet both processes require lots of energy, which has traditionally made each of them expensive. The energy generated by LFTRs and municipally integrated renewables removes energy cost as a major factor, allowing us to extract fresh water and hydrogen fuel from seawater on a massive scale.

This begins with a system known as a Multi-Stage Flash Distillation Chamber (MSFD),[4] as seen in this diagram: 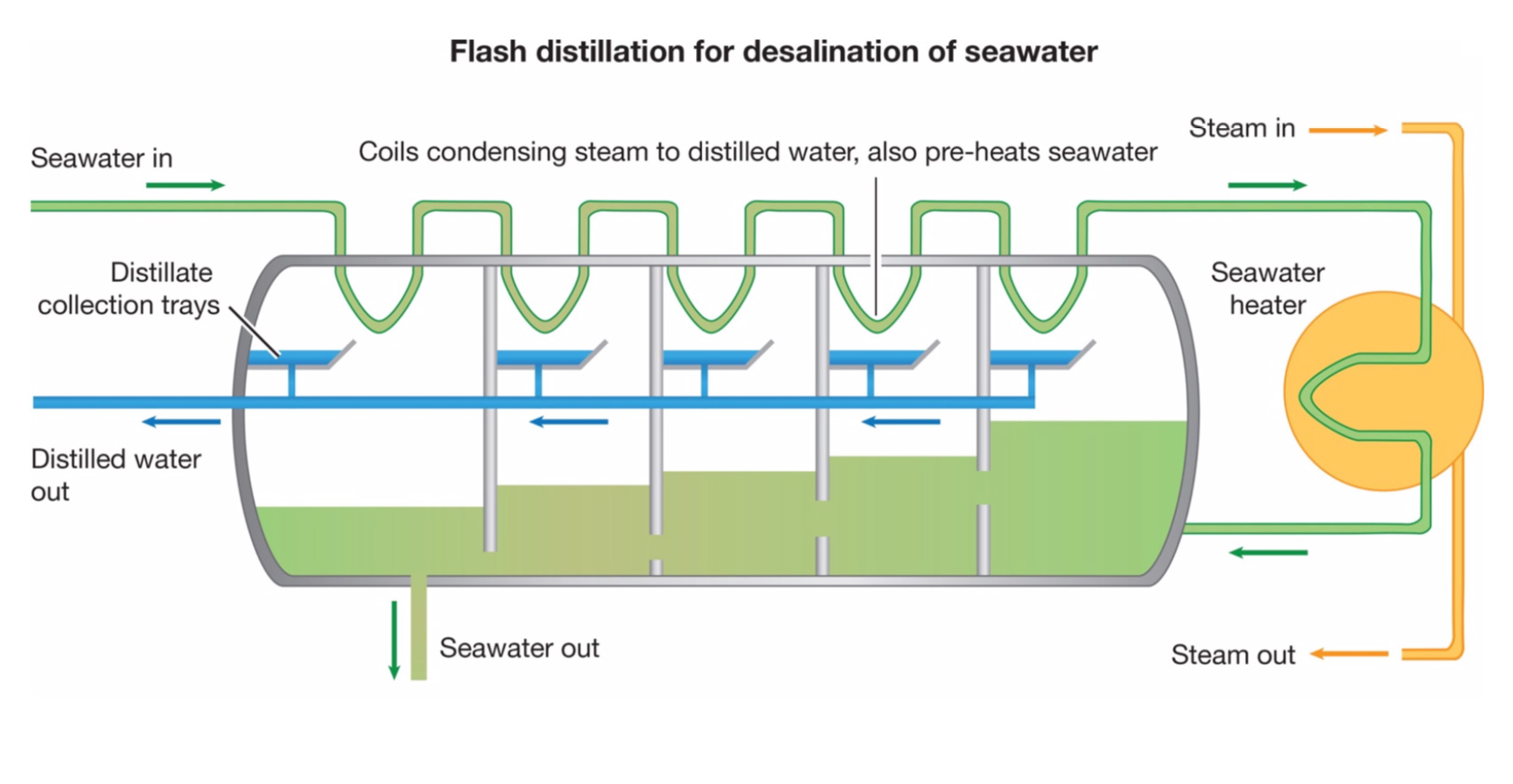 An MSFD facility features a series of interconnected chambers (referred to as “stages”) set at varied temperatures and pressures relating to the boiling point of water. Seawater is pumped in through one end and heated to reach a certain temperature. Once at the right temperature, it’s then pumped into subsequent stages, each of which has a different temperature and pressure. This process forces seawater to instantly flash-turn to steam, which is then collected via a condenser and turned into liquid fresh water.

From there, the remaining hot brine is pumped back into the system to counterflow with the influx of cold seawater, helping to heat new seawater and recycle a majority of heat energy in the process.[6] What waste remains is essentially very salty water, which can be evaporated to leave only salt.

MSFD is common today; 60% of all desalinated seawater in the world[8] is produced through this method, and more than 18,000 MSFD facilities exist globally.[9] However, MSFD is an energy-intensive process with high operating expenses, making it more difficult to justify at larger scales. Scarcity Zero seeks to lower the cost of multi-stage flash distillation, giving us the ability to desalinate unlimited amounts of fresh water as a function of the framework.

The use of the word “unlimited” here bears special mention. There is a vastness to the oceans that “71% of Earth’s surface” does not give justice to. Only 0.4% of water on Earth is both fresh and accessible, and that’s been enough for humanity until the present. With that in mind, we would have to increase our water consumption thousands of times for desalination to even measurably impact sea levels – especially since the water cycle would eventually return all desalinated water to the ocean. And even if we did somehow lower sea levels, it would be to our benefit anyway, as sea levels are rising due to climate change.[10]

Valid questions exist as to the extent of the environmental impact of MSFD, both on local ecosystems and on the ocean as a whole. Conceptually, MSFD doesn’t do anything to the environment except place a pipe in the ocean and suck in seawater; rather than one large pipe that might risk capturing marine life, a smaller series of filtered pipes designed to reduce ecological impact can be used.

As these intake systems can operate twenty-four hours a day, a large volume of water can be secured through a slow yet steady flow – meaning it does not need to be strong enough to measurably interfere with the local ecosystem. The greatest environmental impact of MSFD plants today usually involves the dumping of waste brine back into the ocean with chemicals[11] – steps that need not be taken with modern facilities for two primary reasons:

That latter point presents an important question, though: if we were to desalinate seawater on a large scale, how do we deal with all the leftover salt? The answer? Simply sell it.

According to the U.S. Geological Survey, the United States consumed 69,500 thousand metric tons of salt in 2015 for all purposes.[14] At 69.5 million metric tons, that translates to 153.2 billion pounds of salt. This means a 500-billion-gallon annual desalination effort would yield around 91% of our annual salt consumption. At an estimated price of $40-$50 per long tonne (2,204lbs) 140.63 billion pounds would yield roughly $2.5 billion in profits from annual salt sales (assuming $40 per tonne).[15]

With these concerns addressed, MSFD technologies can be harnessed to produce unlimited amounts of fresh water for any use, with negligible fiscal and environmental costs. This would effectively end water scarcity as a concept. And we can then do the same for fuel.