The first function of the Scarcity Zero framework is to deploy renewable power in the most effective and scalable methods possible. While dedicated wind and solar farms retain notable utility, we believe that the single best approach is to instead integrate renewables directly within the municipal infrastructure of population centers.

In the context of solar power, municipalities present billions of square feet of sun-exposed surface area nationwide that can be covered with photovoltaic panels, which are today both inexpensive and flexible in deployment. Going beyond rooftops, photovoltaic panels can be installed within the windows and siding of buildings, on the sides of bridges and overpasses, and on top of canopies over parking lots, highways, road medians and bike paths. Nearly every aspect of municipal infrastructure can today be seamlessly integrated with a means generate power from the sun.

Wind, too, can be similarly integrated. As wind power has evolved from skyscraper-sized turbines that are hallmarks of traditional wind farms, small modular turbines can today be deployed alongside solar panels within the thousands of miles of highway medians surrounding America’s cities. As highway medians are flat, straight and municipally owned, they collectively present billions of additional square feet that are effectively free to deploy wind at scale – which in this context can be significantly boosted by air movement from passing vehicles. 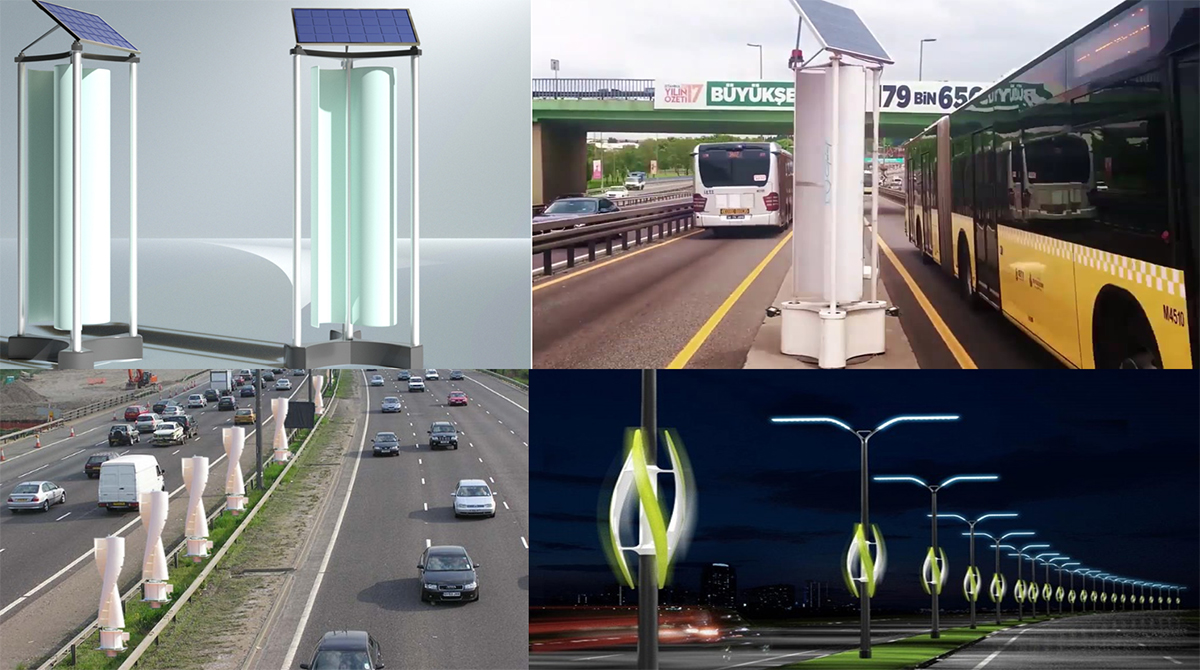 Modular, mass-produced wind turbines powered by vehicle traffic at the medians of highways.

It is difficult to overstate the potential scale of energy generation made possible by targeting municipal infrastructure as a deployment vector for renewable power. This is not only because it offers an unrivaled expanse of cost-free surface area and flexibility of location, but also because this approach solves most of the challenges facing large-scale renewable deployment today. (Note: the remaining challenges of material throughput, carbon-neutral manufacturing and end-of-life recycling are dedicated roles of Scarcity Zero's second core function, Cogeneration Facilities.

Expanses of American cities, reflecting only a fraction of national urban landscapes.

Beyond addressing these challenges, integrating renewables within municipal infrastructure turns each individual panel or turbine into a node that in aggregate helps underwrite a smart, redundantly reinforced electric grid. At maximum scale, every building, parking lot, highway median, bridge, overpass and all points in between become a means to both generate and transmit electricity – which, when connected, can upgrade and eventually replace the antiquated electric grids that are today struggling to keep up with our ever-advancing society.

As of this writing, our national electric grid is comprised of 7,600+ decentralized power plants that are owned by 3,200+ competing utility companies that transmit electricity through 450,000+ miles of high voltage power lines, relay stations and transformers – effectively a convoluted mess. This arbitrary deployment of infrastructure does not operate within a cohesive, dynamic and scalable framework, nor does it utilize cooperating systems that are mass-manufactured to a modular standard for rapid installation and replacement. This contributes to the problem of power shortages and regional blackouts, which is getting worse over time as our existing electric grids decay. The currently estimated cost to upgrade them using today’s technology exceeds $2 trillion. Integrating renewables within municipal infrastructure can effectively solve this problem at a far superior return on investment across all relevant metrics.

To read more about how Scarcity Zero helps build a clean energy future, click the links below: