Universal Energy's first power source is integrated renewables. By integrating renewable energy technology directly within municipal and large-scale infrastructure, it significantly reduces the demand cities place on electric grids, and, eventually, can turn cities into power-generating nodes. This, in turn, significantly increases the generating capacity of our current - and future - power infrastructure.

Thorium is the second power source, as it enables an immense capability for clean power generation that can be used to amplify our power-generating capacity to both serve as a nationwide base-load energy backbone, as well as produce vital resources as an auxiliary function. Of these resources, none are more important than fresh water and hydrogen fuel.

Here's how this works:

Because thorium reactors (LFTRs) operate at high temperature, there is an ample supply of waste heat energy that can be used to desalinate seawater into fresh water. The cleanest way to accomplish this goal today, Multi-Stage Flash Distillation (MSFD), simply pumps seawater through a system set at varied temperatures and pressures to "flash" heat seawater into steam, where it is collected into a condenser in the form of fresh water.[1]

While Multi-Stage Flash Distillation is the most common form of seawater desalination today,[2] it carries intense energy requirements which comes with high operational costs. However, thorium reactors operate at such a high temperature that it's feasible to use the reactor's heat transfer mechanisms as counterflow exchangers to preheat seawater to boiling before it even reaches the desalination facility.[3] This means that simply by using waste heat, we can cleanly desalinate seawater nationwide on a massive scale.

Yet that's only one part of the equation. Not only does thorium generate enough clean heat to desalinate seawater on an effectively unlimited scale, the combination of thorium with integrated renewables provides enough clean energy to use desalinated seawater to extract an effectively unlimited volume of hydrogen fuel as a result of electrolysis.[4]

By deploying such facilities in close proximity with each other, we can generate immense clean power and an indefinite volume of both fresh water and hydrogen fuel as a byproduct of the waste energy of clean power generation. This process, commonly known as "cogeneration" or "combined heat and power," is a major booster of efficiency and cost savings in modern power-generating systems.[5]

Universal Energy seeks to employ cogeneration as a primary operating principle, as detailed in the image below. 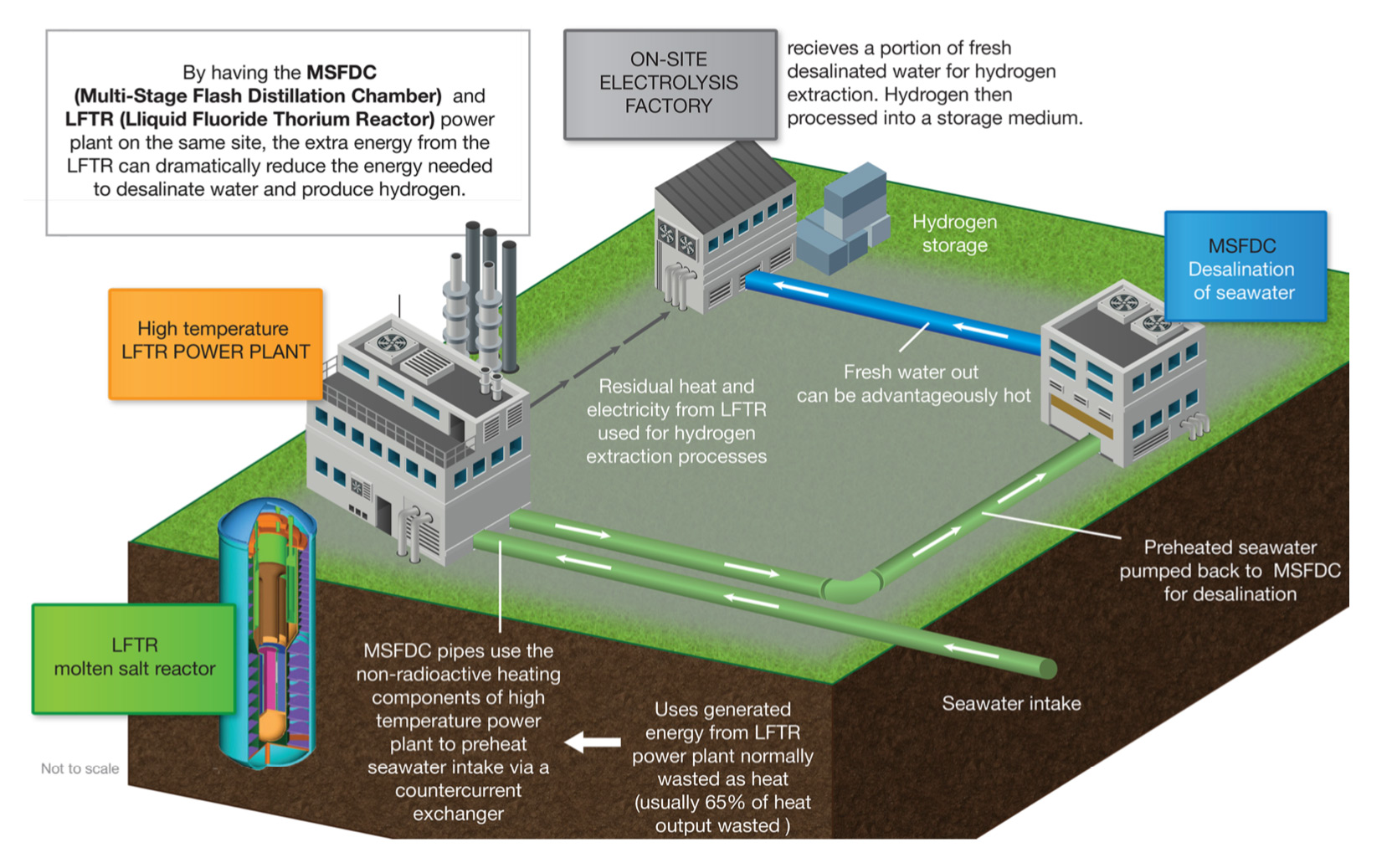 Not only can such cogenerative facilities produce both clean energy and vital resources to effectively any scale desirable, they can also power arrays of atmospheric scrubbing facilities to extract greenhouse gasses from our atmosphere to help reverse climate change.

From there, the next stage is to use this immense supply of desalinated water within the National Aqueduct to both solve drought and water scarcity nationwide, and also serve as a nationwide battery to store energy generated by renewables.

Click the button below to see how Universal Energy uses water and hydrogen to help build a clean energy future: