At its most basic form, life requires energy, water and food. Historically, we’ve depended exclusively on nature to provide those first two resources so that we could grow the third. With Universal Energy, this would no longer need to be the case.

An effectively unlimited supply of electricity, water and fuel gives us opportunities to revolutionize our industrial and agricultural systems, allowing us to grow produce locally in indoor farms. This produce can be healthier and of better quality than much of what we cultivate today – and more of it can be grown at greater efficiencies with shorter delivery times (and reduced environmental impact) on less land.[1]

These systems can be built close to areas where food is consumed, which reduces obstacles to transportation and delivery, especially within urban environments. Indoor farms can also be climate controlled and operate 24 hours a day, 365 days a year – dramatically increasing output and efficiency compared to traditional agricultural methods. Past obstacles to implementing them in the past stemmed primarily from material and resource costs,[2] problems that Universal Energy substantially reduces.

With indoor farms, as long as there is water, light and heat, the location and outside environment doesn’t matter. This allows food to be grown anywhere on the planet at any time of year, with increased yield, higher efficiency, longer growing seasons, and greater food security. 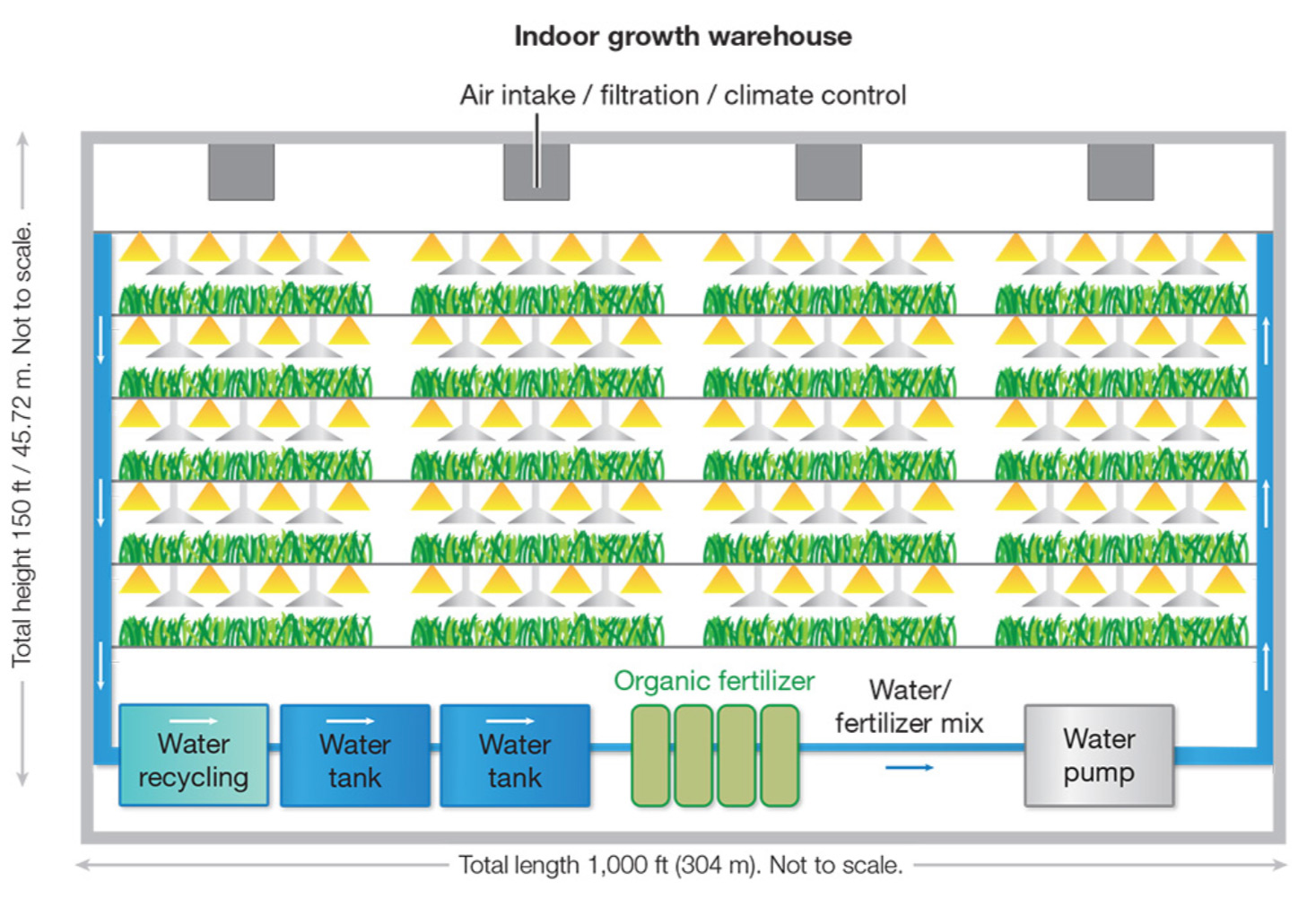 In this concept image of an indoor farming warehouse, water from storage tanks is mixed with an organic fertilizer made from excess plant matter grown within the warehouse itself. This water is then pumped through the facility and dispersed over plots of crops that grow under high-intensity lights. These crops would grow on modular wheeled platforms that can be easily moved, and the crops growing on them can be manually pollinated as necessary.

What water isn’t absorbed by crops drains into a collection mechanism in the floor, which sends the water to the bottom of the warehouse where it is filtered and placed back into circulation. As we see today, the construction of large warehouses at acceptable cost isn’t uncommon – take any Walmart, Target, Home Depot or other big-box retailer, for example. These buildings are huge, often encompassing a surface area into the hundreds of thousands of square feet. Similar structures present promising opportunities for indoor farming.

If an indoor farming warehouse had dimensions of 600' per side, that comes to a total surface area of 360,000 square feet (roughly 1/15th of the surface area of Tesla Headquarters).[3] Yet if the growing platforms were stacked, each subsequent layer adds that same surface area to the aggregate total to become a force multiplier. At five stacks, that warehouse now offers 1.8 million square feet of growing space. At ten stacks, 3.6 million. At twenty stacks, 7.2 million. Building two dozen of such warehouses, at twenty stacks each, would boast a total growing surface of 172.8 million square feet. That’s 3,967 acres - some 6.2 square miles.

As these warehouses would operate 24 hours a day, 365 days a year, their aggregate output could grow large enough to provide food for large metropolitan areas – the capabilities of which would be limited only by the number of indoor farm clusters. This setup is becoming more common, and is in use throughout many of the indoor farms that have sprung up around the world today. 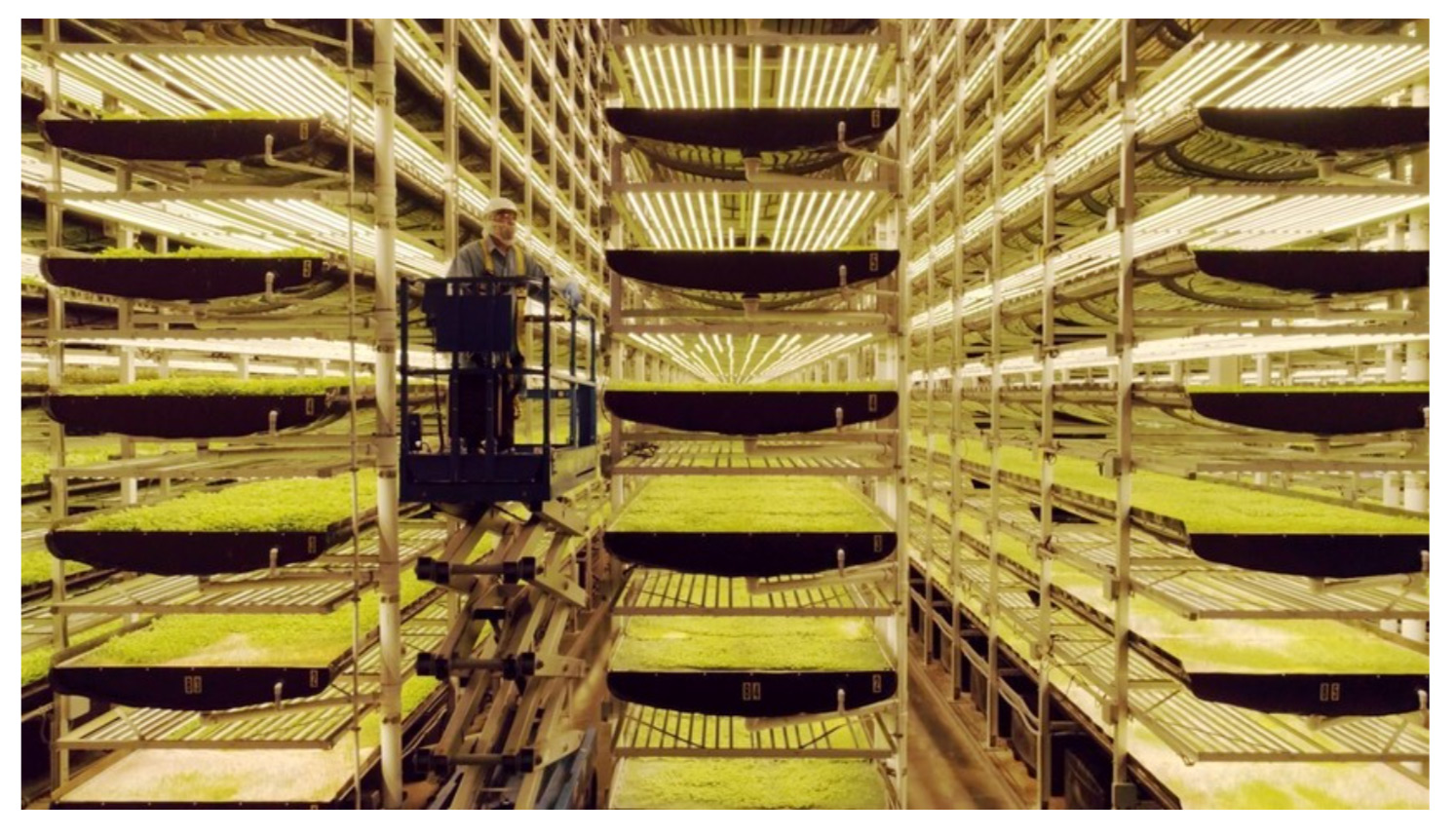 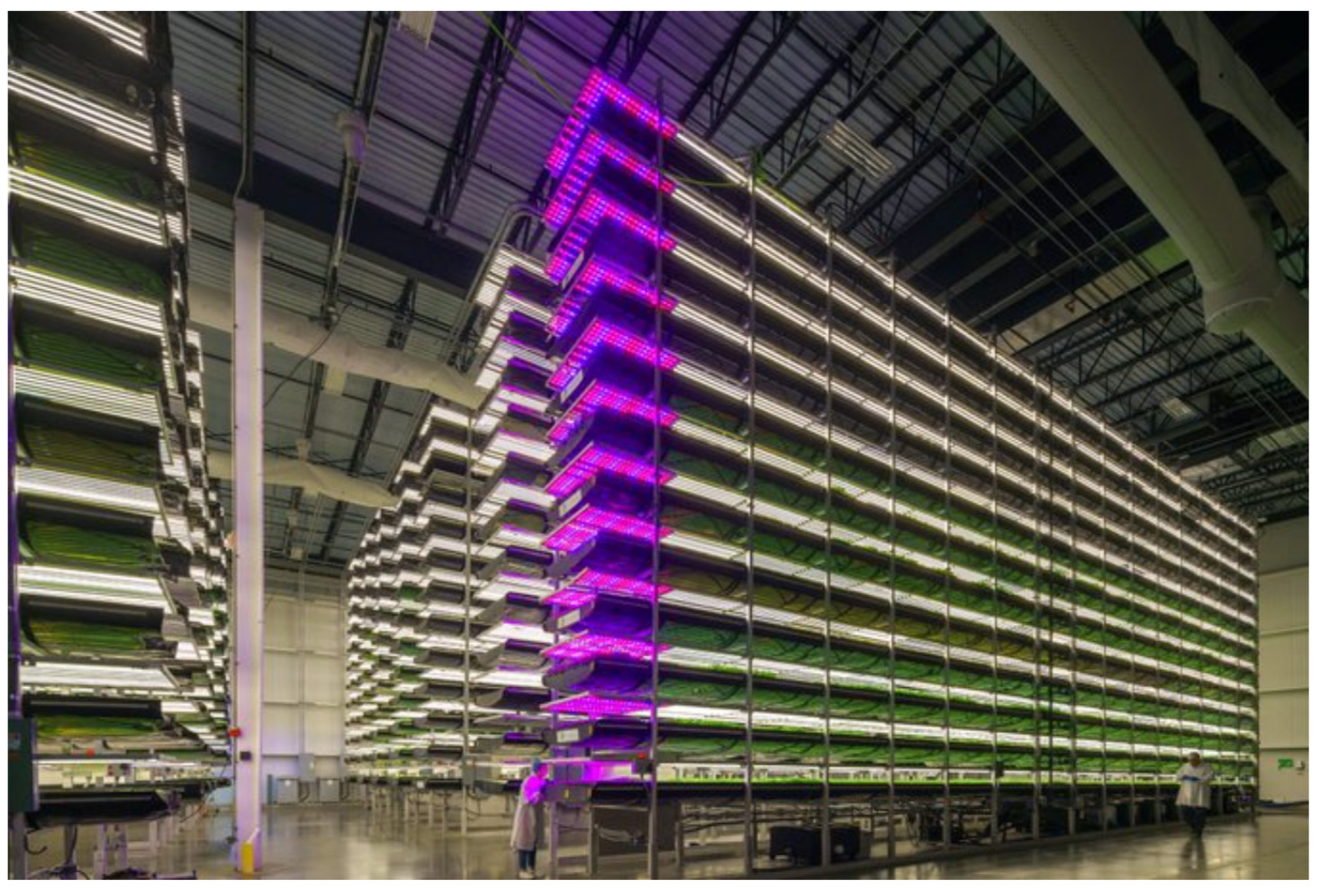 Total control of environment and constant operation. Since humans discovered how to farm, we’ve been limited to a growing season as determined by the local environment. Indoor farming completely bypasses this limitation, allowing us to emulate any growing conditions we wish. Moreover, indoor farms can be customized to the point where we’d have total control over the temperature, humidity, light spectrum, and soil composition in any given section of warehouse. And as indoor farms operate 24/7/365, they can reflect the ideal light cycle for any plant grown. This would dramatically increase overall efficiency, as there would be no seasonal slowdowns or environmental complications.

Technology-driven pest/contaminant prevention. Pests and weeds are problems in any open environment – problems we’ve tried to solve with herbicides and pesticides of varying degrees of toxicity. As they offer total control of environmental setting, indoor farms allow us to manage the presence of weeds and pests without dependence on more toxic chemicals. Examples include:

Waste management. Indoor farms can be designed to minimize the use of artificial fertilizers through composting. Whenever a plant dies, sheds material, or leaves behind waste after harvest, that material can be collected into a composting mechanism (shown in the concept image at the start of this chapter) that can be mixed with other organic fertilizers and pumped directly into the water supply used to irrigate crops. As much of the world’s soil is facing varying degrees of contamination (such as arsenic in rice and steroids in runoff water from feed lots),[4] this method translates to healthier food.

Diversity of crops. As their components would provide ideal growing environments that are naturally pest-resistant, indoor farms can encourage greater use of heirloom crops that might not fare as well as a genetically modified variant outdoors. This allows us to cultivate a greater variety of produce and shift our focus towards growing food with higher nutritional properties, expanding organic and farm-to-table markets.

Local operation. Indoor farms can be built in close proximity to metropolitan areas, so that food is grown close to the people who consume it. Food production in New York would be consumed by New Yorkers, food production in California would be consumed by Californians. This simplifies the delivery of food from farm to market, saving resources and allowing for fresher produce.

It can also present major improvements to how we provide food aid, as global anti-famine initiatives usually involve shipping food that’s already grown. With indoor farms, the system itself can comprise the aid, allowing stressed regions to grow their own produce by themselves.

Food efficiency. As touched on earlier, the benefits of indoor farming present notable benefits for efficiency. The indoor farming startup Plenty claims that indoor farms can produce roughly 350 times as much produce-per-acre of land, with only 1% of the associated water usage.[5] AeroFarms, a New Jersey indoor farming startup, claims they can produce upwards of 130 times the amount of produce grown per acre, with similar reductions in water usage.[6] Even if these numbers are inflated – which seems unlikely, considering the ideal growing conditions and 24/7/365 growing season that indoor farms provide – at even half the claimed efficiency improvements, the benefits would still be enormous compared to traditional agriculture.

In addition to growing efficiency, the efficiency of delivery, particularly as it relates to food quality, must also be considered. Approximately 35% of the fruits and vegetables we eat as Americans are imported from abroad, with leafy greens traveling an average of 2,000 miles from farm to plate.[7] Some produce travels for weeks before being served, losing, at some estimates, 45% of its nutritional value in the process.[8] Further, regardless of nutritional value, Americans rarely buy unsightly produce. Locally grown food would provide significant benefits in this area.[9] 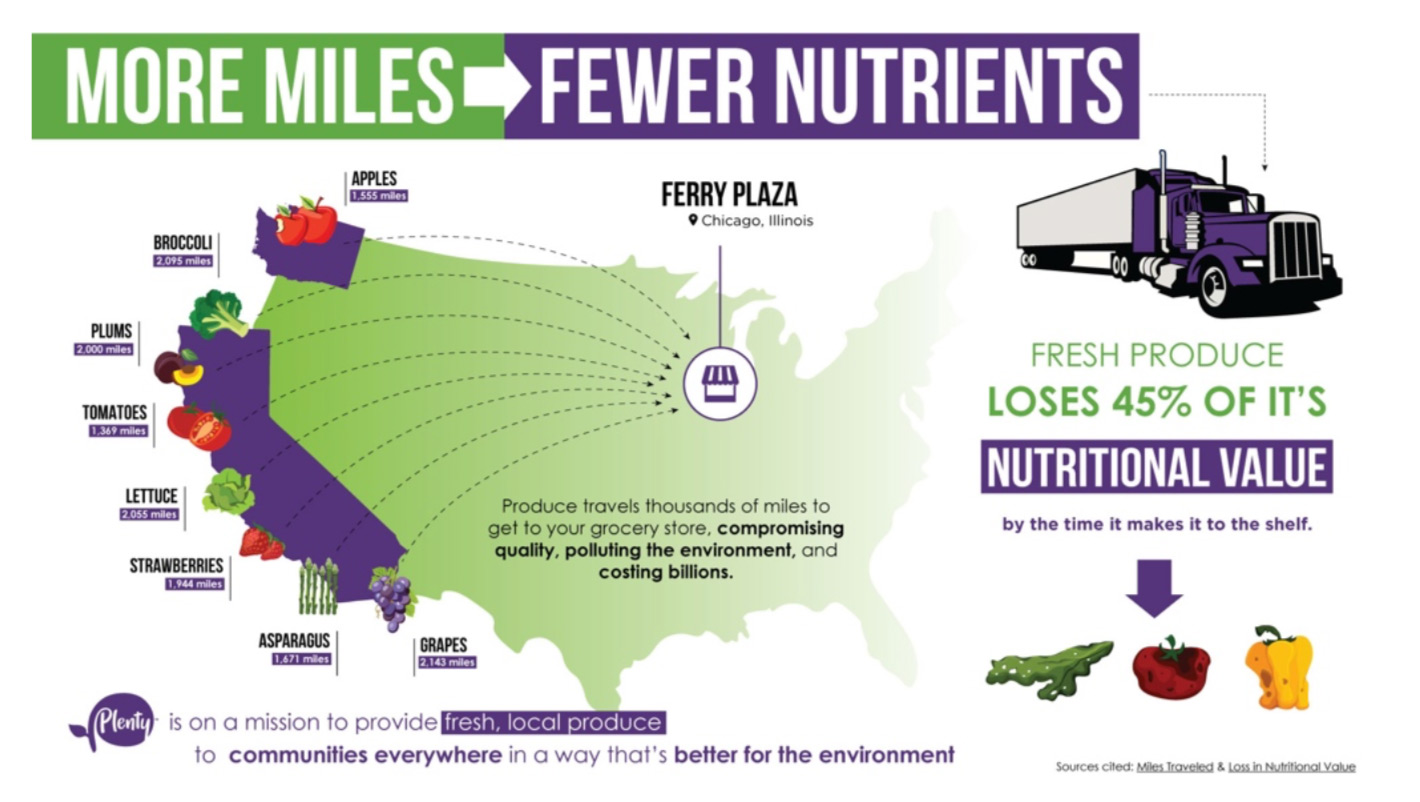 Food security. Local food production in isolated environments also allows us to reduce security risks to our food supply. In late 2011, a Listeria outbreak in cantaloupe killed more than 20 people in the United States,[10] and food contamination (and recalls) have proven relatively frequent as of late.[11] Supermarkets across the nation are stocked with produce that comes from different states, different countries, even different continents, and it’s hard to keep track of where everything is coming from in real time. So, when an outbreak is detected, our food networks are thrown into chaos until investigators can pinpoint the source of the contamination and isolate it. With locally grown produce, security issues, however rarer, are automatically isolated since production environments are sealed.

This also protects our food supply from pathogens. Genetically modified crops, often with identical genomes, make up large swaths of our food supply – comprising approximately 90% of soy and corn.[12] Of the crops with identical genetics, any self-replicating pathogen that could infect one plant could potentially infect all of them.[13] By design, indoor farms exercise self-quarantine, which is likely the best defense they could have.

Indoor farming can provide local and sustainable food production while systematically avoiding most of the obstacles and threats that exist in agriculture today. But beyond indoor growth in warehouses, we can integrate indoor farms directly within urban environments – not only to supplement food production, but also to serve as centerpieces for more advanced cities with next-generation infrastructure.